Battered fish is usually made with a white fish; usually cod that’s been dipped into a mixture of flour, eggs, and seasonings, and then fried to a golden crispy perfection. The 1860s saw the rise of fish and chip shops in the UK, and this was one of the few foods that weren’t rationed during World War II. During the early days of fish-and-chip shops, a coal fire was often used to heat large pots of cooking fat to cook the food. Over time, the fish-and-chip shop developed into something more standard, with the food served in paper bags, but this practice has now largely disappeared, with plain paper, cardboard, or plastic wrapping being used instead. This beer-battered fish recipe brings back memories. Four years ago, I had the fortunate experience of flying overseas for a visit, with an eight-hour stopover in London. (Of course, that wasn’t the fortunate part!) Heathrow Airport is rather large, but in my ventures of exploring the many shops, I came across a pub-type restaurant. I sat down and ordered the beer-battered fish and chips and all I can say is OMG! It was honestly the best fish I had ever eaten. I’ve prepared a few different recipes at home since then, hoping for that same ‌taste experience. I haven’t mastered it yet, but this recipe comes very close.
No ratings yet
Print Recipe Pin Recipe
Prep Time 15 mins
Cook Time 15 mins
Servings 4 people My kids love taco night. However, they were not at all enthralled with the prospect of eating a fish taco. Don’t get me wrong, they like fish, but the thought of eating it on a taco just seemed weird to them. I enjoy having them help prepare dinner, especially when it’s a new recipe. I find it piques their interest in trying new things when they actually have a hand in creating something. These fish tacos have so much flavor and have now become my kids' new favorite dish.
No ratings yet
Print Recipe Pin Recipe
Prep Time 20 mins
Cook Time 15 mins
Servings 4 people 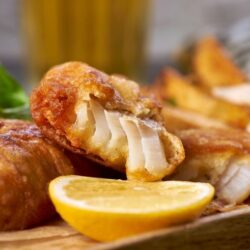 My dad would often prepare this recipe if he had a good day of fishing. Perhaps that is when my love of cooking with lemon started. Although it calls for perch, you can substitute it with cod orhaddock.
No ratings yet
Print Recipe Pin Recipe
Prep Time 10 mins
Cook Time 15 mins
Servings 4 people

Tried this recipe?Let us know how it was!
(Visited 776 times, 4 visits today)