Baking is a favorite hobby of mine. It gives me so much joy to see others enjoy the things I create for them. To be honest, I never had a love for pears. I always found them woody and gritty tasting. Due to my consumption, before they were ripe, I discovered this was the reason. One of my friends suggested I leave them for a couple of days on the counter in a paper bag to ripen. I was surprised to see the ripened pears after three days and could enjoy one without the woody texture. 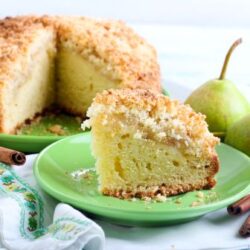 This cake always seems to be a big hit in the fall and winter seasons. Alternatively, you could make this recipe with canned pears if you cannot find any fresh pears at your local market.
No ratings yet
Print Recipe Pin Recipe
Prep Time 30 mins
Cook Time 1 hr
Servings 6 people Just like bananas, pears too can become overripe before you know it. This is the perfect cake to make for just that occasion. Rather than discard them, put them to use in this delicious-tasting upside-down cake.
No ratings yet
Print Recipe Pin Recipe
Prep Time 20 mins
Cook Time 40 mins
Servings 6 people This cake is perfect for any occasion. It’s light and moist without being overly sweet and pairs well with a scoop of vanilla ice cream or on its own.
No ratings yet
Print Recipe Pin Recipe
Prep Time 20 mins
Cook Time 45 mins
Servings 6 people

Tried this recipe?Let us know how it was!
(Visited 185 times, 1 visits today)