One of the best accompaniments to a turkey dinner is gravy. It just doesn’t seem like a proper holiday meal without it. Gravy is not a common side dish in our home, but I will prepare it once or twice throughout the year, usually at Christmas time. Below are a few variations of gravy recipes, but first, a bit of history. 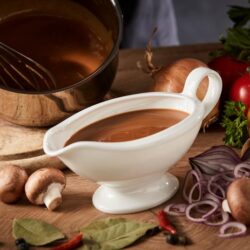 This is a traditional Southern recipe in which my family in Texas makes at Christmas time. When I heard the suggestion that this gravy would be good on anything other than meat, I had my doubts. This isa popular gravy used the next morning to go along with your eggs, bacon, and biscuits, and it mildly surprised me that I did indeed enjoy it as much as they predicted.
No ratings yet
Print Recipe Pin Recipe
Prep Time 5 mins
Cook Time 15 mins
Servings 6 people 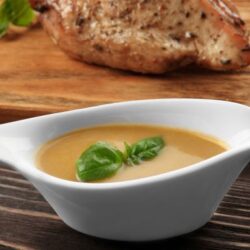 This gravy recipe is great to make with those big turkey holiday dinners. The next day, we would mix the leftovers together,(depending on whether there are enough mashed potatoes) shape them into patties, fry, and serve with the remaining gravy.
No ratings yet
Print Recipe Pin Recipe
Prep Time 30 mins
Cook Time 4 hrs
Servings 6 people I have to admit; I have never been a huge fan of mushrooms, but I enjoy them in this gravy recipe. I will usually double the recipe (you may have to add extra chicken broth) and use it to make turkey potpies. It also works really well in a modified version of shepherd's pie (just omit the ground beef for ground turkey or chicken).
No ratings yet
Print Recipe Pin Recipe
Prep Time 5 mins
Cook Time 15 mins
Servings 6 people

Most people will correlate gravy as an accompaniment to the big holiday dinners, consuming it as little as one to two times a year. Other countries and cultures will have it as often as every week. There are many variations of gravy and depending on your preferences, you may or may like any of them, other than the one you are used to. I know for myself, I usually stick with the recipe from my childhood because that is what I know and like. I have friends that will make two different recipes; a new recipe, and the traditional recipe as a backup. I also know others who don’t want the bother of preparing gravy at all and will buy a can of already made gravy from the local grocery store. Whatever your preference, just be sure to enjoy it.