Fried chicken is, as the name suggests; pieces of chicken that are heavily seasoned or battered and fried to golden perfection. History suggests that the Scottish were the first to fry their chicken in fat, albeit without seasoning. Fried chicken was also evident from descendants of Africa as well, with one noticeable difference being the use of seasoning in their fried chicken cuisine. The Scottish and African fried chicken techniques were combined in the southern part of America when the Africans were used as slaves.

When slavery was abolished, fried chicken became a common dish not only in homes across America but also in popular restaurant chains we know and love, such as KFC and Popeyes. However, with the right recipe, a delicious dish of fried chicken can be made to taste just as good, if not better than some of those popular brands. These oven-fried chicken tenders are just as tasty as your typical fried chicken recipes. It's possible to fry these, but I prefer to bake them, as it creates less mess and produces a perfect fried chicken taste without using a lot of oil. Serve these with a side of mashed potatoes and homemade coleslaw and you'll have yourself a pure dish of comfort. For crispy tenders, make sure that your oven is preheated and do not overbake.
No ratings yet
Print Recipe Pin Recipe
Prep Time 15 mins
Cook Time 20 mins
Servings 4 people Fried chicken can be time-consuming,but this buttermilk recipe is worth it. Because buttermilk contains enzymes that break down the protein in the chicken, it makes for a more tender, flavorful fried chicken. My husband loves this fried chicken recipe, especially when it is served with a side of homemade mac and cheese and fresh biscuits.
No ratings yet
Print Recipe Pin Recipe
Prep Time 1 hr 15 mins
Cook Time 15 mins
Servings 4 people 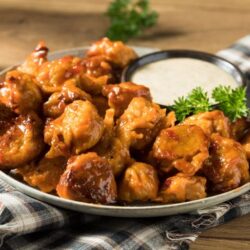 I love chicken wings, but to be honest,the ones I’ve bought and cooked from grocery stores always seem to be soggy. However, these homemade parmesan wings are just the opposite. These are flavorful and crispy and make the perfect accompaniment to a movie or game night.
No ratings yet
Print Recipe Pin Recipe
Prep Time 15 mins
Cook Time 10 mins
Servings 4 people

Tried this recipe?Let us know how it was!
(Visited 581 times, 1 visits today)